Debut CD - From Here to There

I am pleased to announce the release of my debut CD - From Here to There. Works from this album span a variety of mediums including orchestral, film, choral, soloists and chamber ensembles. A whole host of well-known artists are featured including: Dan Willis, Jack Morer, Conrad Harris, Doug Oberhamer, David Nyberg, Laura Keopke, Dave Anthony and many others.

Have a great holiday!

Tom
Posted by Tom Nazziola at 8:37 AM No comments:

I had the good fortune to attend a recent concert this past Saturday by the Juilliard Pre-College Orchestra under the direction of maestro Adam Glaser. It was truly a rewarding experience to see young musicians performing challenging music and conveying such musical maturity and artistry. This is in no small part due to the conducting skills of Adam Glaser. In a world where conductors sometimes get consumed by their own sense of gesture (more for the sake of theatrics than practicality), Mr. Glaser communicated the music to the orchestra in a most clear and artistic manner. One could hear the performers executing the very musical ideas, shapes and phrases emanating from the conductor's baton.  Indeed, the greatest challenge for any conductor is to impart a true sense of how the music is to be performed and expressed (in a way that makes it easy for the performer to both understand and translate for the listener).  Among the wonderful selections for the evening (Wagner's Prelude and Liebestod from Tristan and Isolde and Schumann's Cello Concerto in A Minor, Op. 129), my favorite was Mussorgsky's renowned "Pictures at an Exhibition" (orchestrated / arranged by Maurice Ravel).

I believe this was the most challenging piece on the program...not only for the orchestra as a whole but for several of the soloists performing repeated themes at extreme dynamics and varying ranges. The principal trumpet received a work-out for the evening and held his own from the lyrical melodies of the "Promenade" to the majestic "Great Gate of Kiev." Horn players were also featured both as a section and as soloists.  Perhaps the most challenging aspect of this piece is to deliver with consistency.  After all, the audience has many opportunities to hear the same theme performed by various sections of the orchestra throughout the course of the piece. Therefore, it becomes clear what the themes are and how they should sound. Indeed, this puts the artist in the position of being "exposed", if you will, in his / her rendering of these beautifully recurring themes (not always in a friendly range or dynamic). That said, the performers held their own from the outstandingly consistent cymbal crashes (not an easy thing to so...ask any percussionist) to the frolicking oboe in the "ballet of the unhatched chickens". The brass section as a whole performed well-balanced chords with great majesty and conviction. Additionally, the strings imparted a sense of dreaminess from the ethereal muted passages to the haunting tremolo figures.

Again, kudos to you Maestro Glaser and to the Juilliard Pre-College Orchestra for a wonderful evening of music-making.

Looking forward to the next one....


Posted by Tom Nazziola at 5:16 PM No comments:

Only through art can we emerge from ourselves and know what another person sees.- Marcel Proust 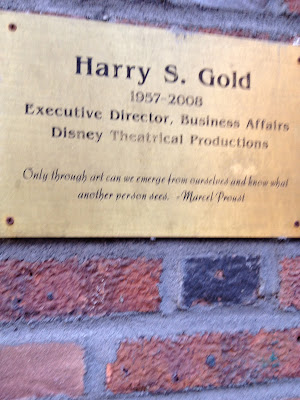 Posted by Tom Nazziola at 8:54 PM No comments:

Who is your audience?

It’s a basic but interesting question. I see this topic come up quite a bit with many composers. In college, students tend to gravitate towards composing for their immediate audience – teachers and other students. Sometimes it happens subconsciously in an effort to display “chops” or sophistication. It’s easy to get caught up in “what is hip”, cutting edge or even intellectually advanced. But these are all really distractions that move us away from the most basic reason for composing, which is self–expression. And if we are honest, we can admit that we really write for ourselves...or at least we should.

Several of the greatest living composers and performers agree with the notion that it is important to write for yourself. As my composition teacher back at Juilliard used to say, “If YOU don’t love it, who will?” Likewise, Pat Metheney referenced a similar idea in a recent AFM article in which he states that each artist needs to be his or her biggest fan. In other words, you’ve got to write music that you really love. Once you do that, others will connect with you and your music.

It’s also important to remember that your potential audience is actually everyone!…and if you compose from a genuine place (a sincere perspective), the listener will hear and know your voice. Not everyone has to like your music, however a good composition transcends personal preferences and can be appreciated by all. There is a collective feeling of quality that come across when an artist is true to his or her own instincts. In today’s environment there are so many areas to be concerned with in addition to your craft including: self - marketing / promotion, grants / commissions; learning to incorporate technology (an ever-changing medium) and a whole host of other elements. But, in the end, it doesn’t matter how long the list is. Everything begins and ends with communicating to others what it is you really want to say.  Compose in this manner, and you’ll always be heard…..sooner or later  :)
Posted by Tom Nazziola at 5:20 PM No comments:

It was only a couple of months ago that I found out Heavy D passed away at the age of 44. I was truly saddened by this news as I've been a fan of his music since his arrival on the scene in the early 90's. There are so many positive things to say about Heavy D (aka Dwight Meyers), that it's hard to know where to begin. Well, here's a start......in the world of hip hop, you'd be hard-pressed to find anyone who could swing as hard as Heavy D. His rhythm and rhyming skills are unmatched. On top of that, he kept it clean with regard to language and had the respect of many notable artists in hip hop, R &B, pop, and film (Spike Lee, Queen Latifah, Martin Lawrence, LL Cool J, Mary J. Blige and many others). Just watching his videos was enough to convey the positive, feel-good energy that was a trademark of his sound.

I've always believed that hip-hop, at its best, represented the sequel to Be-bop in its swinging feel and social commentary. Be-bop was a social / musical reaction to the music happening at the time (swing) and was developed /  performed by predominantly black artists. I'm including a couple of links to his tunes that are sure to bring a smile. Thank God for artists like Heavy D......keeping it swinging and keeping it real!

Is it Good to You:
http://www.youtube.com/watch?v=2RZUuw5m6UM

Winter Newsletter 2012
Posted by Tom Nazziola at 8:06 AM No comments:

I’m currently listening to “Word of Mouth” by Jaco Pastorius. I’ve been a fan of Jaco’s music since I first heard him on Pat Metheney’s first release – Bright Size Life. I’ve also had the privilege of studying with Bob Moses – the drummer on this LP (Bob provided insight into how that magnificent trio worked).  Jaco is one of the most intriguing musicians I’ve ever had the pleasure to discover. Although I’ve never met him personally, I felt like I knew him through the many stories I’ve heard from so many musicians that have either jammed, recorded or toured with him. Unfortunately, he suffered from bipolar disorder, which contributed towards his demise (along with a history of drugs). However, like most great artists, you cannot take away the magical contribution he provided on every level – as a bass player (and he was the best….not just because he said it), a composer and a theatrical performer (check him out on Joni Mitchell’s “Shadow’s in Light” DVD). “Word of Mouth” is an album that put some of Jaco’s tunes on the “standards” map. “Three views of a Secret” is not only a well-crafted melody, but a beautiful, free-sounding waltz (thanks in no small part to Jack DeJohnette’s floating drum performance... one can imagine an image of rolling hills and ocean waves washing over the music in Jack’s effortless drum style…always driving, always swinging. Then of course, we have “Liberty City” which is, without question, a staple part of the big band repertoire.

I’ve always felt that a truly successful album should feel like an engaging show, including certain elements: a.) a beginning statement to get your attention such as Track one: “Crisis”…this should be en exercise for all bass players….just to see if they can hangJ  b.) several different colors or diverse pieces that take the listener on a sonic journey with twists and turns c.) a rewarding ending that feels like you’re glad you stayed for the whole experience…..and this certainly happens with “John and Mary” (last track on the album). The intro chords for “John and Mary” are harmonic gems leading us directly to the grooving ostinato, which is at the very heart of the tune. Throughout the album one can feel the overflow of creativity, groove and intelligent thought behind every tune (not to mention that everyone from the scene at the time is on this album including: Michael Brecker, Don Alias, David Taylor, Wayne Shorter, Peter Gordon, Toots Teilelman, Snooky Young, Tom Scott and so many others).

Though his accomplishments are known by virtually everyone in the jazz world (and even R & B), I’d like to say thank you, Jaco, wherever you are. Your music has made the difference for me.

Deciding on a mix

I'm currently working on a debut CD of my compositions, which can be a very tedious process. As I'm confirming mixes, I'm reminded of something I've always practiced in the past in deciding on a final mix. No matter how perfect or imperfect the mix seems at first, it's always best to wait a few days and come back to it with a fresh perspective. It always amazes me how certain aspects of a mix (that were not noticed initially) become obvious over time.
Posted by Tom Nazziola at 11:02 AM No comments: